Professor and Chair of Music Michael Casey, A&S Grad ’92, is a musician and a computer scientist, composing, performing, programming, and analyzing music and sound. 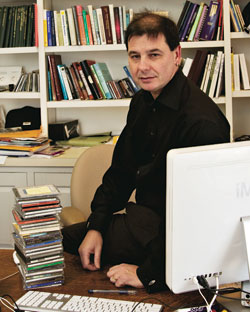 Michael Casey, A&S Grad ’92, creates music at the intersection of many disciplines. (photo by Joseph Mehling ’69)

Back to the future: He earned his masters in electroacoustic music from Dartmouth in 1992. The College has gone through plenty of changes since then, Casey says. “It’s not just the new buildings. Dartmouth is a more diverse place now. It was an amazing experience back then, but there are now more opportunities for interdisciplinary learning. And it’s interesting to be on the other side of the fence.” Casey, who did his undergraduate work at the University of East Anglia in Norwich, England, earned a PhD in media arts and sciences from the Media Laboratory at MIT, and was previously a professor of computer science at Goldsmiths, University of London, where he also directed the Media Futures Laboratory and founded the BSc program in creative computing.

An orchestrated classroom: “Technology is changing teaching,” Casey says. “It offers lots of new ways to learn and to create, but we need to use it for the best possible purposes. Part of that is dealing with what the limits are.” Along with a departmental colleague, Casey is using social networking tools—including the messaging system Twitter—during portions of class discussions as a way of enriching and amplifying the conversation. He assesses new tools by asking, “Is this particular new technology helping students learn about music, or is it a distraction?”

New musicians: As department chair, Casey oversees a newly redesigned major. “We’ve already doubled the number of students who have declared a major in music compared to last year,” he says. “It’s a difficult balancing act studying a performing art. We’ve made music more compatible with other majors.” The balance is also about removing barriers, making it possible to study music seriously even for those who don’t arrive at Dartmouth as accomplished musicians with 10 years of study on an instrument. The major, he points out, enables students to “engage in an active, deep, and academic way with something they’re already passionate about in their personal lives.” The graduate program has refocused as well. Recast as a program in “digital musics,” it invites creativity and research into not only making music but also into how music can be stored, found, and shared. Casey says the new focus is paying off: “This year, the graduate program is enjoying the highest number and quality of applicants in its 21-year history.”

Coda: “The music department is very much a part of the wider digital humanities community at Dartmouth,” says Casey. He and his colleagues—and their students—have research partnerships with computer science, neuroscience, mathematics, and other fields. Music is naturally interdisciplinary, he observes, and we’re in an era “when the study of music is presenting vast new opportunities to analyze and understand culture more deeply and to create new forms of audio-visual experience in response to our changing times.”