Not every college student wants to spend 10 weeks in rural Costa Rica, working long hours in the field while battling muggy weather and vicious mosquitoes. But count Ellen Irwin ’14 as one who does.

“It was a lot of fun,” she says. “It was an amazing experience.”

Irwin spent a term last year working with Ramsa Chaves-Ulloa, a PhD student in the ecology and evolutionary biology program, collecting insects from 12 streams in rugged northwest Costa Rica. It was just one of the ways the two women, who have spent countless hours together in the classroom, field, and laboratory, have built a mutually beneficial academic relationship as mentor and mentee.

During their stay in Costa Rica, Chaves-Ulloa and Irwin collected hundreds of insects from different streams. Part of Chaves-Ulloa’s research is focused on Costa Rica, where she looks at whether human land use affects the number and type of insects in Costa Rican streams, and which insects, and how many of them, will emerge from the stream and perhaps be eaten by riparian predators such as spiders, bats, and lizards.

For an undergraduate to get this kind of extended, first-hand fieldwork is an unusual opportunity. Chaves-Ulloa says she in turn benefited greatly from having Irwin accompany her in the field. 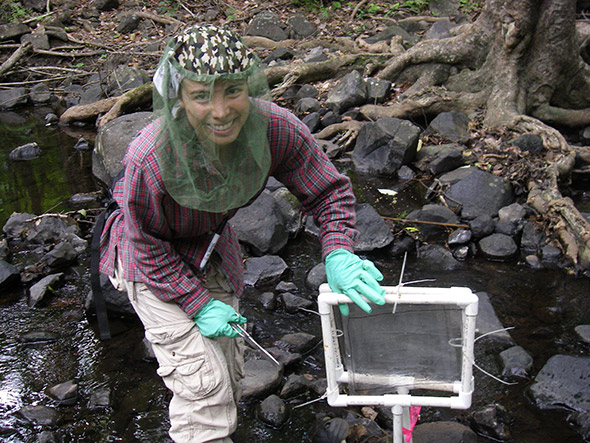 “I knew Ellen was a strong worker, and that our research was something she was excited about,” says Chaves-Ulloa, who is in her fourth year of graduate studies. “I knew she loved biology.”

Irwin, a biology and history double major, says she did not see the fieldwork in Costa Rica as tedious, despite the long hours. The two often woke at 5:30 a.m. and worked until 7 p.m. They had to deal with the natural elements, such as mosquitoes that were so numerous that when Irwin didn’t wear gloves one day, her hands looked deformed from all the bites and swelling.

“It’s like nothing you’ve experienced,” says Irwin, who is from Hanover. “It was an adventure every day.” 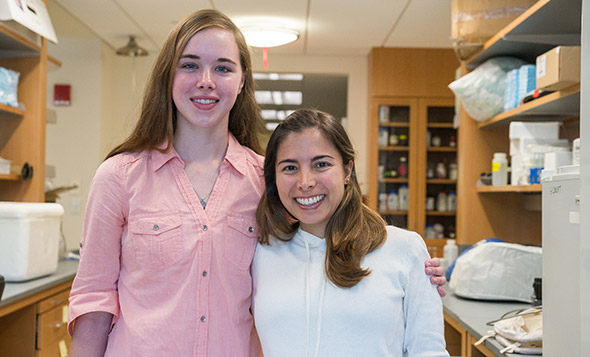 Ellen Irwin ’14 (left) has worked with Ramsa Chaves-Ulloa in the lab and the field. (Photo by Eli Burakian ’00)

One adventure, or perhaps misadventure, happened when Chaves-Ulloa became separated from Irwin and the rest of the group. Chaves-Ulloa soon became disoriented in the woods. With darkness setting in, she realized she had to make a choice.

“My options were swimming across a stream infested with crocodiles, or sleeping where I was for the night and hoping someone found me. I decided I’d rather take my chances with the crocodiles than the mosquitoes,” she says with a laugh. She was able to reconnect with the group after crossing the stream.

While Chaves-Ulloa may have lost her sense of direction that time, Irwin says she has been a guiding compass as a teacher and researcher.

“Ramsa’s always been a great mentor to me,” says Irwin. “It’s just great to have someone to go to and talk with about graduate schools and career paths, but also just personal issues.”

As for Chaves-Ulloa’s career path, she may become a professor, though she is also interested in conservation work. The aspect of teaching she enjoys most is being a mentor, she says.

“I love to work with students,” says Chaves-Ulloa, who this spring was chosen as an Outstanding Graduate Student Teacher. “I love to share my passion for biology with them.”

Chaves-Ulloa and Irwin are currently processing samples and analyzing data from the insects in the Class of 1978 Life Sciences Center. Irwin is grateful to have gained useful research skills, and Chaves-Ulloa is glad to have someone she can trust in handling important data. Irwin will present a poster session on their research at the Karen E. Wetterhahn Science Symposium on May 23.

Up next for Irwin is a trip to Alaska, where she will conduct fieldwork as part of a research internship. Irwin thinks her work with Chaves-Ulloa helped her get the position. “They seemed really impressed by my work in Costa Rica,” she says.

In Alaska, she shouldn’t have to worry about as many mosquitoes or crocodiles as Costa Rica. No doubt, there will be other obstacles. “Grizzly bears and small aircraft,” she says with a laugh.

Thanks to the guidance of Chaves-Ulloa and her experience in Costa Rica, Irwin should be able to handle most anything that comes along.